Bring the sound of the concert hall to your device with Spotify and many other streaming providers!

"Music is something magical that everyone feels differently. Where others feel sadness, some feel a glimmer of hope. We all feel differently, but that in turn makes us all the same."

after a Chopin Recital

"Where most classical musicians only use one color from the palette, I prefer to use all colors, so I appeal to everyone."

ASK A QUESTION
SOLD OUT

Deniz Türkmen knows how to make a concert colorful

Hong Kong, Bangkok, London, Singapore, Macau, Dubai, Paris, New York, Shenzhen and Kuala Lumpur are few of several places where the virtuoso Deniz Türkmen enchanted the listeners. The German-Turkish pianist and composer is now one of the absolute exceptional talents in the world.
His concerts are very versatile and always include different composers from the classical period, songs of different nations he has arranged for the piano, as cherry on the cream cake some own compositions.

Many of his own works reflect his mysterious personality, as he always leaves a lot of room for interpretation, which makes it interestingly difficult for the audience to gain an insight into the deepest sanctum of his inner world.
Being part of his audience is like going away on a trip to another planet – many people might think of an LSD trip when they read that, but music itself is regarded as a ‘drug’ by many individuals, as it is something magical that connects human beings, which Deniz Türkmen does with his repertoire in an outstanding way.
In fact, this ‘drug’ is the earth – his home – for the virtuoso and the “earth has its music for those who will listen”, as George Santayana once said. 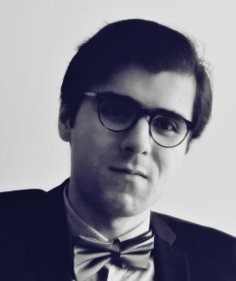 Part I
From Bach to Prokofiev, the exceptional talent has a challenging repertoire that he always shows in his concerts. Deniz Türkmen also differs from other concert pianists in bringing less known composers such as Guillaume Lekeu to the program, a composer who died at just 24, but a composer far more demanding than Schubert or Beethoven.
Also popular are his Chopin interpretations. He become well-known as the “Young Chopin” among piano lovers. So much sensitivity and laxity make his way of playing Chopin unique and marvelous.

Part II
Songs like ‘Kalinka’ or ‘Hava Nagila’ have already been arranged by so many concert pianists, but the arrangements of Deniz Türkmen are pieces to break the fingers, which can count as a competitive sport. A lot of flexibility and perseverance are required in his arrangements to master these.
He has also arranged songs of Turkish art music, which are rich in beauty and elegance. The song ‘Sari Gelin’ evolves from pianissimo in C minor to fortissimo in E minor and is truly one of the greatest arrangements in the piano history. An arrangement that blows at the beginning like a spring wind, but later suddenly explodes like a volcano. Only a master can arrange with such a fire.

Part III
‘Poems’ is the latest composition by Deniz Türkmen. Various thundering and stormy pieces that reach the limits of the possible, but at the same time pieces with romantic and profound passages that lead one into a completely different world.
Such majestic, diabolical and thoughtful compositions the world has never heard before, these works are a treasure chest of music.

Part IV
Even with the encores Deniz Türkmen knows no limit. One encore after the other. The master pianist plays with great tenderness and all harshness if need be.
He gives the impression that he could play the concert again. The passionate marathon runner simply knows no exhaustion.

Deniz Türkmen, a musician with so many colors on the palette. His naturalness on the piano is always remarkable. May this genius continue to enchant this world with beautiful music.

LISTEN ON SPOTIFY
DONATE A COFFEE

The etude for piano and orchestra by Deniz Türkmen was recorded in California: Listen now!

GOLDEN BULWARK has more than 5000 members!