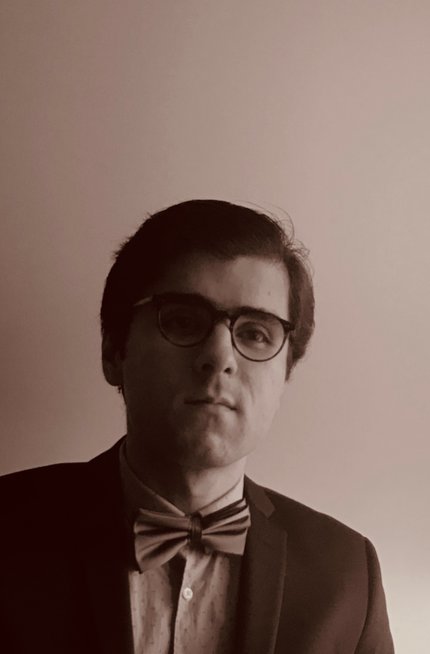 Deniz Türkmen was born on October 8, 1991 in Oberhausen, Germany. He started playing the piano at the age of 11 under the church musician Paul Brenninkmeyer. He was very talented and was able to play Bach, Mozart and Haydn after only a few piano lessons. A few months later he gave his first public concert and received huge praise.

After his debut at the age of 23 in the concert hall of Mülheim an der Ruhr in the presence of the mayoress, the German-Turkish pianist and composer Deniz Türkmen established himself as one of the prime virtuosos in the history of Mülheim an der Ruhr, his hometown. A historical concert, which was in several magazines, newspapers and radios – the breakthrough, that opened the door to Europe for him. He had stations in Germany, Netherlands, Belgium, Denmark, United Kingdom, Poland, Czechia, Austria, Italy, Slovenia, Hungary, Croatia, Serbia, North Macedonia, Bulgaria, Greece and Turkey, on this tour he get also inspired for his first masterpieces 'Turkish Fantasy' and 'Ambivalenza', which are now parts of his 'Grand Sonata'. Beside his concerts and working as leader on projects in different places of Europe, he also lived a long time in Rome, where he gave concerts and seminars about "Natural piano playing with help of the research method", a method that he developed himself. Afterwards, Deniz Türkmen and his group GOLDEN BULWARK toured through Europe with a large project, where they worked on his gigantic composition 'Etude for piano and orchestra'.

“Deniz Türkmen is one of the greatest virtuosos of our time, a multitalented ambitious young man, a creator of a new music, a maestro who is on the way to be a composer like Chopin and Liszt – musicians will play his compositions even in thousand years!”

Before the breakthrough, he was awarded by Paul Brenninkmeyer as his best student ever. Peter Feuchtwanger, who was a student of legends like Edwin Fischer and Walter Gieseking, predicted a big career for Deniz Türkmen, who presented a premiere of his own compositions in the hall of mirrors in Mülheim an der Ruhr. Bernhard Bücker louded Deniz Türkmen for his brilliance.

Deniz Türkmen now teaches his students and performs all over the world with concerts, projects and seminars. He is sponsored by bee smart city.

In his concerts he performs a lot with his own works and for example with works by Bach, Beethoven, Schubert, Chopin, Brahms, Grieg, Satie, Scriabin, Rachmaninoff or with forgotten composers like Lekeu. He is also very well known for his piano arrangements of Turkish and Azerbaijani art songs that made it into the top 100 charts on Apple Music in Turkey in the 'World Music' category. A large number of listeners to these arrangements live in cultural cities such as Istanbul, Ankara and Izmir. With his arrangement of the song 'Bana Ellerini Ver' (Give Me Your Hands) he even made it into the top 50 charts.

In 2018, he was awarded with the PoliteAward for multitalented people by The CosmoPolite in California.

In 2019, many of his musician friends advised him to participate in the Erwin Schulhoff Competition for pianists and composers in Florida. Although Deniz Türkmen is not a friend of competitions, he finally took part there and won the first prize with much praise from the jury. From 2020, Deniz Türkmen himself will sit on the jury.

Deniz Türkmen started composing as a child. His style was very influenced by Viennese classical music, the influence of Haydn, Mozart and Beethoven was clearly audible, but he never gave these works an opus number. The older and more mature his piano technique became, the more he distanced himself from Viennese classical music and became increasingly concerned with romantic composers such as Chopin, Liszt, Scriabin and Rachmaninoff, which can also be heard in Opus 1 'Compositions Pour Piano'. His Opus 2 'Grand Sonata' was premiered in his hometown in the concert hall in 2016, a masterpiece that has a very late romantic character. The Opus 3 'Etude For Piano And Orchestra' was first performed in California in 2018 and was praised as an "important step for music". His Opus 4 'Jazzy Donut' is composed for a trio with piano, bass and drums, a very demanding work in the style of jazz music. The Opus 5 'Poems' is one of the most difficult compositions by Deniz Türkmen, various thundering and stormy pieces that reach the limits of the possible, but at the same time pieces with romantic and profound passages that lead one into a completely different world. Opus 6 '101 Poems Without Words' are small pieces with very different characters that have been composed over the years on his travels. Deniz Türkmen also describes these works as "Poems Of Different Cultures". Opus 7 'Hungarian Rhapsody' is dedicated to Franz Liszt. It belongs by far to the works where a concert pianist needs a lot of perseverance and strength. Opus 8 'Turkmenian Suite' was composed spontaneously because Deniz Türkmen often talked to his father about his roots in Turkmenistan, this inspired him to compose a collection of short pieces. Opus 9 'Pavane For A Dead Angel' is composed for his cousin who died at a very young age. Opus 10 '12 Symphonies Of The 12 Months' are individual symphonies. The world premiere is scheduled for 2023 in the US. Opus 11 '1923' is the third sonata, a very challenging short sonata in the style of Prokofiev which is about the Turkish War of Independence.

In addition to his career as a pianist, composer and piano teacher, Deniz Türkmen is also a successful computer scientist, cryptocurrency expert and passionate cook. Deniz Türkmen also writes articles in the fields of technology, investing, sports and nutrition for The CosmoPolite Times in Los Angeles. He is often called "Einstein of the Piano" among his fans.

His parents are retired. Gülay Türkmen (mother) worked as a cook at Siemens. Celal Türkmen (father) was a quality manager at Siemens. Cagdas Türkmen (brother) is a neuropsychologist and works as a doctoral student in an addiction clinic. Furthermore, he has also researched at important universities such as Oxford University, and has publications such as in the well-known scientific journal 'Nature'.